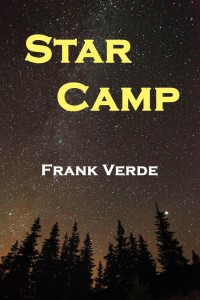 Star Camp is for the child in all of us.

If Harry Potter were a muggle, he would spend his summers at Star Camp.

Like Hogwarts School of Witchcraft and Wizardry, Star Camp does not appear on any map. Call it Area 52 if you like, but it isn’t identified by name or number. The campers are told it’s Star Camp. They are not told that it’s the setting for the ultimate top-secret program, a training ground for the next generation of space explorers.

Imagine summer camp on steroids, where everything is bigger and more dangerous. Tucked away in a luscious green landscape, this former Cold War military base contains everything from a vast mountain complex of tunnels and waterfalls to the world’s largest treehouse, complete with chutes and ladders. It’s where ordinary kids are tested in extraordinary ways during six weeks of intense combination and insane fun.

Part science fiction, part mystery, Star Camp is a nonstop adventure romp that is meant for the entire family.

I have been a professional writer/editor for more than 30 years. And in all that time, I have never had a more enjoyable experience working on a story than I did with Star Camp.

That’s not hyperbole, nor is it marketing mumbo jumbo. It’s the God’s honest truth.

Here’s an excerpt from Star Wars:

“Each week, Amy and her crew at the dolphin training complex will conduct dolphin races, with points being awarded to the fastest ‘jockeys’ and their team. In addition, a rodeo-like riding competition will be held at the midterm. There also will be the usual swimming and running competitions, culminating in an orienteering race that will combine racing and map reading. Each athlete will receive instructions and a detailed map of the grounds at the start of the race. He or she will have to move from points A to B to C, etcetera, receiving new instructions at each station. Whomever completes the course in the fastest time is the winner.”

Now it was Gage who squirmed in his seat with excitement.

“Finally,” Mugabi continued after taking a breath, “George will oversee a survival test, where teams will have to draw on all they have mastered this summer in order to pass a full week in the wilderness – on their own.”

George “Bulldog” Broward folded his arms across his chest, a self-satisfied grin forming above his rock-like jaw.

“Of course,” Mugabi added, seeking to assure the youngsters, “you will be ready for anything once it is time for the survival test. I am sure everyone will come through the test with flying colors.” She glanced back at Bryant when she said this, seeking reassurance herself, but it didn’t come. The colonel just continued to stare straight ahead.

“Now, you may be asking yourself, why all this emphasis on competition? Simply put, to continue in this program, you must accumulate more points than your fellow campers. At the end of the summer, the campers with the most points will receive an invitation to next year’s camp. Those who fall short … will not.”

The colonel stood and came around the table to Doctor Mugabi.

“Thank you, doctor.” She passed him the microphone and joined the counselors on stage.

“I’ll try to keep this brief,” Bryant began. “There are only a finite number of slots available for next year’s program. And those slots will be filled by this summer’s top-scoring candidates. You will be awarded points for your performance in each class and activity, as well as competitions. Some will weigh more heavily than others. In a moment, the camp will be divided into two – cave dwellers and tree froggers. You will be assigned more than lodgings, you will be assigned a team and compete against the other team in various competitions. A member of a winning team will be awarded points, even if he or she did not compete. The individual winners will receive bonus points.”

At that moment, floor boards in the middle aisle parted and a glass compartment carrying a man in a white lab coat appeared from below. He was writing on a clipboard.

Campers were impressed, to say the least.

“Umpires will award points for victories and delete points for infractions. Some of these umpires will be in plain sight,” the colonel said as the glass compartment disappeared below the floorboards again. “Others will be unseen. But rest assured, they will be watching you.”

Martin and Gage exchanged glances. They didn’t speak, but they didn’t have to. Both boys weren’t crazy about being watched at all times, and it showed on their faces.

“One final word of advice. Although your loyalties will be to your team – either cave dwellers or tree froggers – your main allegiance must be to the camp itself. On this point, there will be no slack given. But I’ve talked enough. Remain in your seats. It’s time we picked teams.”

Part of the fun behind Star Camp is the story, but much of my enjoyment evolved from the main characters. They are kids who we grew up with or wished that we grew up with.

For those who are turned off by “kid’s stories,” I say it’s as much a kid story as the Harry Potter books are. All are fun reads that transport the reader to magical worlds, whether driven by sorcery or alien technology.

Give it a try. You won’t be disappointed.

2 thoughts on “Star Camp: A Welcome”